I set off today to make crackers, use up more of those carrots, and bake a cake.  Toward the end of the afternoon I realized that I didn’t want to clean I had some extra time so I decided to try a peanut butter nougat which has been on my list of things to try.

And thus I present my first baking blunder (well, first to this blog, definitely not my first fail….)

Nougat involves whipping hot syrup into a whipped egg white.  I do this frequently for some of my favorite frostings, however I think the mixer is entirely too big for adding syrup to just one egg white. 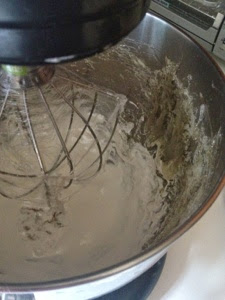 Note the strands of sugar that look ‘cob-webby’ around the whisk and the globs of hardened syrup on the side (which I later actually cut myself on while trying to wash the bowl!).  And while it’s hard to see, in the bottom by the end of the whip is a HUGE glob of syrup that just swirled around the whites…I plan to try this again, hopefully with better results next time..

What I'm Writing About